A happy new year to one and all! After a winter break I battled the elements to visit the ICA, SW1, where they are currently showcasing the Bloomberg New Contemporaries of 2013, covering many exciting art forms including sculpture and video art. Shortlisted from over 1,500 entries, the shortlisted artists have been praised for their tapping 'into popular and domestic culture', allowing accessibility for a wider viewing audience. This is also done with the range of media used in the exhibiting pieces.

The title of the exhibition alone sparked excitement for me, as I am aware that the Bloomberg New Contemporaries is an organisation that picks the best emerging artists from the UK's art schools. There is clearly some fresh talent at the ICA, presenting some big ideas. Chronologically the first piece is Dante Rendle Traynor's (yes, I hope that's his real name too) video piece, 'Show'. This consists of a man wearing a face of shaving cream - I'm not sure whether this is Rendle Traynor - speaking manically, with the script appearing as a backdrop, behind his floating head. Although some of what is said is nonsensical, it could be inferred to present the ambiguity of identity, which as a young artist is something  that I'm sure is relevant to himself and his peers. This certainly appeals and reaches out to many people in Rendle Traynor's audience. Amid this stream of consciousness, suddenly a question such as 'who am I?' will appear, and it immediately prompts the viewer to reevaluate the piece, as it is certainly not merely a comical dress-up monologue. 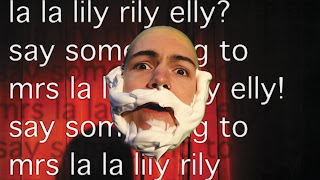 The term 'surrealism' seems to have adopted a new, perhaps milder meaning in the postmodern age. Can it be used to describe something avant-garde?

Isabelle Southwood's 'Homer Wake Up You're Alive' is a piece that proves how essential physical perspective is. Reading the title, my cultured side was battling to find some connection to The Odyssey, but upon taking a few paces back, I discovered that this is in fact a close-up of Homer Simpson! Result! Southwood's use of media is intriguing: mustard, pepper, wallpaper paste and tape. This is a piece of art that seems to be made in Homer Simpson's honour. However there is an idea that still draws the comparison to the odyssey of self-discovery that Homer of the eighth century wrote his epic about. The canvas presents a composition of identity; fans of the cartoon series will know that food is perhaps Homer Simpson's biggest passion in life, and the artist has recreated him using food. Southwood has produced a replication of a cartoon but has given the canvas more substance with her use of media and title.

It is always such a pleasure for any art writer, and viewer, when a piece is both aesthetically beautiful and contextually rich. Of course I am aware that tastes will vary so different viewers will find this in different places. Since picking up an interest in neon art, having looked further into the work of the likes of Chris Bracey, I have a deep appreciation for Steven Morgana's 'It Was All Ephemeral As A Rainbow', which is a spectacle installation using mirror and neon lights. Interestingly the citation states that the lighting was 'originally powered by a portable electric generator, refuelled with petrol decanted into various brands of bottled water cheaper per litre than the water it replaces'. Admittedly I did need to read this a couple of times over before understanding the concept fully but there is certainly an angle that Morgana wishes to convey about environmental practice. The neon lighting seems to exude ideas of the world and its welfare, as its position as a rainbow, with an obvious nod to sourcing issues. 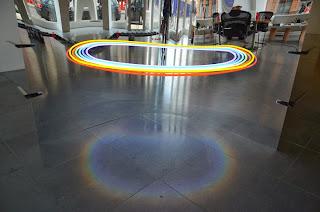 'It Was All Ephemeral As A Rainbow / Extract (Light Sculpture' by Steven Morgana
Image courtesy of www.stevenmorgana.com

Finally, a piece that certainly caught my eye was Maarten van den Bos' 'Body Culture'. Its ambiguity is perplexing: the greyness could represent the neutrality of who the painting can relate to. The figure is fairly sexless; there is something of a phallic shape present but the chaotic nature of the canvas shows how contemporary 'body culture' is complex yet very much open. This would appear to be a positive aspect, however the grey and blue tones van den Bos has used would suggest otherwise; he has clearly picked up on popular culture, as the exhibition boasts, and places emphasis on the scrutiny that we feel is imposed upon our bodies.

The Bloomberg New Contemporaries exhibition for 2013 is a first-class selection of inspired and inspiring art students from across the country. The rich diversity and exciting quality of work is well worth visiting, as the bold values ensure there is something to please all artistic tastes.