ASC Gallery: Notes On An Autobiography (until 8th March 2014)

Update: ASC Gallery has re-located from Elephant and Castle to nearby Aylesbury Estate.

On my first visit to the ASC Gallery, SE1, I went to see its current exhibition, 'Notes On An Autobiography'. The concept of self-reflection and identity in contemporary art fascinates me, therefore I was enticed by the exhibition's title, wondering to what extent the idea will be formed. A collection of mixed media, this ongoing project features several artists. 'Notes On An Autobiography' is beginning to focus on itself as an entity, assessing its past, present and future as a collective exhibition and voices what this means to them as artists.

Although personally I found the citing to be rather baffling, I will start with Sion Parkinson's 'Untitled', a set of two mini sculptural pieces taking an excitingly ambiguous form. The artist's use of colour is insightful, as, in keeping with the title, the piece is made personal and almost human with its palette of pinks, yellows and greys. Yet this seems to adhere to the anonymity that Parkinson has developed with the sculpture's title, showing how humans, in form and nature, are not only diverse but are malleable and have various qualities, as well as appearing anonymous in the wider world. The specific sculptures are curious to the viewer, as we cannot quite decipher whether they are beautiful or repulsive, calling to question the eye of the human towards other humans, and the critique we provide on ourselves. 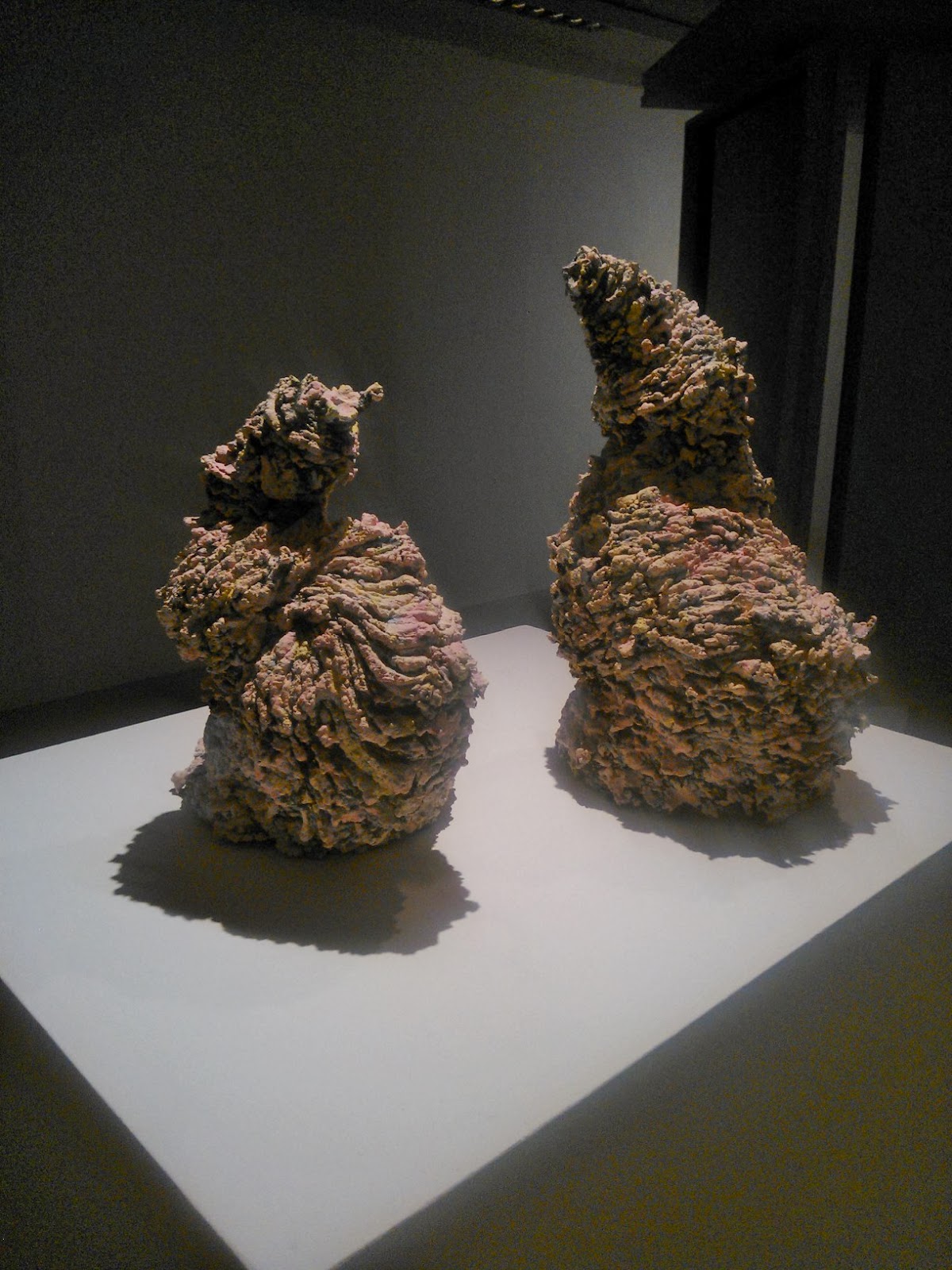 
Meanwhile, Ben Newton's 2014 canvas 'There Is No Message, Only A Medium' seems so identical and relevant to its title that the viewer is led to explore any inconspicuous irony. The artist's expression of lack of meaning and exploration of texture is conveyed in his piece, following in the footsteps of the likes of Frank Stella and Gerhard Richter.The blackness of 'There Is No Message...' could be interpreted as Newton's sceptical view of the contemporary art world. Is he following in the footsteps of Stella out of admiration or is his work parodying the lack of real 'message'?

Before I go on to speak of my favourite piece of the collection, I will address Tamsin Snow and Sarah Tynan's 'Fountain', a large perspex board displaying a magnified image of water, which is depicted as flowing yet is frozen in time in this image. Taking the title of the exhibition, with its consequent pitch to artists, into consideration, it appears that Snow and Tynan are showing the constant movement of time, to the extent that while life ultimately remains the same, as in the circle of life, we have the opportunity to act ours out afresh, like the sensation of water.

Finally, the ASC Gallery presents a video piece by Rebecca Lennon, entitled 'That Thought Had a Brother (A History of The Zero)'. Presented in a factual style, the film brings a fascinating perspective to the idea of the significance of the individual. Exploring what exactly 'zero' or nothing means to different cultures and ideas is exciting and thus makes a truly captivating video. The narrative of the video, which is presented in written form in the exhibition's catalogue, makes evidence for the 'ULTIMATE idea' of the zero. Using visual and descriptive imagery of the empty shell is an interesting message, suggesting that there can never be a true zero, as there will always be something relative in existence to form a 'something'. However the Mayan concept of the zero is explained to us, as 'not NOTHING...a beginning', which blooms a delightfully positive and uplifting message. Without analysing the entire transcript, the voice goes on to talk about love as both everything and nothing, which is thought-provoking in that it makes the viewer put themselves in the image of the history of the zero, allowing engagement with the artist and her vision.