Update: Scream London is no longer functioning as a gallery space.

Scream London, W1, is not a gallery I was familiar with prior to stumbling across it earlier today. For any passers by, it is impossible to resist the gallery's curational strategy to entice us. The use of Yael Kanarek's 'Deeply Concentric' to dress the window, with its multitude of bright colours in a recognisable form which resembles the mandala, alongside the neon light fittings of Chris Bracey certainly appeal to lovers of pop art. Telling Tales presents a range of work from a variety of artists using different media to show how language can be represented in art. Its press release uses an eloquent quote from Joseph Kosuth: "How words are understood is not told by words alone". We find that this idea is able to be translated using different media. Interestingly, the fact that the featured artists derive from not only the UK but Israel, India, Thailand and the USA offers some ideas as to how language is shown through image in different cultures.

Among the artists in the exhibition is Sally Fuerst, an American artist who specialises in something of a 'pop realism'. Her oil paintings are of a photographic quality, yet she draws our attention from the art of her talent towards her subject matter. 'YOLO' is chronologically her first piece in the collection. No matter how recent the piece of contemporary art, seeing 'YOLO' as part of a work of art is both confusing and intriguing, however in an exhibition based on the use of language in art, it is an illuminating stance on modern communication, expressing the distinction and urbanisation of some aspects of language. The entire composition of Fuerst's piece is interesting to a modern viewer, as the human figure is an aesthetically attractive woman, with an evidently fake snake wrapped around her naked frame. This seems to be something of a parody of the Fall of Man, bringing a new dimension of dark comedic effect to the balloons that the woman holds, spelling 'YOLO' ('You Only Live Once' to those who aren't in the know). The canvas certainly is an expression of women's liberation, as the female figure strikes a heroic pose, much like that found in Renaissance painting. 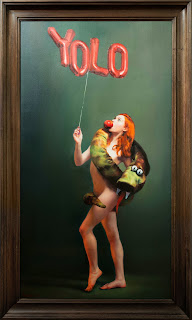 Another American artist that drew my attention at Scream was Meg Hitchcock; so much so that I felt compelled to research her work fully, as something that delves to the heart of the exhibition's theme. It soon becomes clear that language and its effects have a huge impact and influence on the artist's work. Having exhibited her work solely in America, bar one exhibit in Paris and now Scream, she has produced works with such telling titles as 'Sacred Texts' and 'Wordplay'. As such, on her personal website she informs the viewer that she 'discourage[s] a literal reading of the text, to reveal the common spiritual thread that weaves through all sacred writings'. By this she is referring to her 'text work', which shows a decorative movement of sacred texts, thus forming universally acknowledged designs. So instead of depicting a particular culture's way of using art to communicate and vice versa, Hitchcock has made her work universal, using cutouts from sacred script such as the Bible, the Torah and Tantric texts. 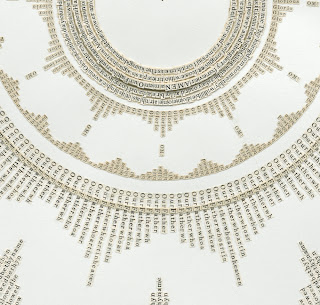 There are two pieces in particular at 'Telling Tales' that really gave a feel for both the misuse of language, and its inadequacy. One of these is Greg Lamarche's 'Schoolboy Crush'. The piece will catapult the majority of its viewers back to memories of young love. The immature collage, resembling a scrapbook, includes snippets of writings and pictures which are clearly significant to the individual that the canvas is based on - the specifics of this are not relevant. As far as feelings and language are addressed, the incoherence of the work resonates the confusion of first love; knowing that it most likely is not 'love', yet still possessing feelings that cannot be sated, but equally cannot be explained. Finally Yael Kanarek's 'Lemon' explicitly sums up the idea of many of the exhibition's pieces. The incomprehensibility of the words descends into a huge dark tangle which spreads across a whole wall of the gallery. The chaos of the image shows the struggle of communication between people, and perhaps also between artist and viewer. I believe that, from the neon lights of Chris Bracey to the melancholy simplicity of David Buckingham's 'The End', this exhibition caters for many interests, including written word, pop art and conceptual art.