Having recently seen the subculture delight that is the performance video piece, This Is Not A Dream, directed by Gavin Butt and Ben Walters, (the trailer to which can be found here: click here for trailer) the promotional material for Richard Saltoun's, W1, latest exhibition enticed me, as it seemed to follow similar themes. While this is not necessarily untrue, the use of the word 'Travesty' in the title decidedly points at illuminating lifestyle choices that society, however tolerant it claims to be, still regards as unacceptable or outrageous.

The exhibition is exquisitely put together, showcasing artists who have produced similar and varied works in equal measure. Luciano Castelli has several pieces in 'Transformer', but one of the most noteworthy is 'Spiegelssal [Mirror Room]', in which the artist takes photographic self portraits in front of angled mirrors. However, instead of the tired, traditional pose associated with self portraits, he utilises the mirror as a tool to show vanity and the self expression that stems from this. The vanity which the artist aims to convey is one which resembles a 1950s Hollywood actress. His coy, flirtacious poses are reminiscent of the likes of Marilyn Monroe, as the artist challenges gender roles and highlights their ambiguity. While the topic of gender neutrality or equality is often addressed in relation to feminism, Castelli challenges the whole concept of gender equality. The viewer reaction to overlapping gender ideals raises questions about whether a foundation for such equality is really possible. Castelli's other pieces in 'Transformer' exude self expression in a way that is hard to contend with. His 'Self Portrait' from 1973 is exactly that; he portrays an unadulterated vision of himself, free of social or personal restraints.

'Transformer' is an exhibition filled with drama and intrigue, showcasing various subcultures, avoiding the absurdity of being represented as cliché or ordinary. This ranges from the graphic to the sinister to the surreal. One artist that certainly stands for the latter is Tony Morgan, with his vintage photography that would not look out of place in a 1930s Surrealist film. In 'Herman Waves', the artist shows a snapshot of his subject in motion. The use of dark black and white photography creates a sinister sensation, yet the facial expression of vitality and delight of the subject is both captivating and disturbing. This sense of bewilderment that the piece offers the viewer only makes our attention acute.

The exhibition is curated in such a way that does not place entries from the same artist consecutively, as it allows the viewer to perceive the artworks in relation to their content, with truly varying messages, rather than the consistency of a particular artist. Now I have partially covered the surreal aspect of 'Transformer', I will address the sinister. Katharina Sieverding's 'Transformer 1 A/B', below, is two photographs which culminate to make one piece. Having produced images that would not look out of place in either a horror or Surrealist film, Sieverding appears to show us how we change in minor ways due to our surroundings while essentially remaining the same. The artist manages to show change and stability within one image, which is remarkable and bold. 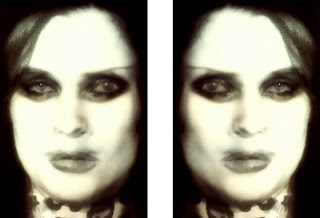 As I begin to express the 'graphic' nature of the exhibition, there is a chance I will not be able to stop, as there are different degrees of what may be deemed as 'graphic'. However there are certain images which are unavoidably so, such as Walter Pfeiffer's 1979 'Untitled', which is a photograph of a man holding his own penis. To me this seems like a portrayal of how men's sexuality is, and has been, at the forefront of many social occurences, and is something which is forced upon women, regarding how they look etc. Interestingly, the exhibition title including the word 'travesty', forces us to question our reaction to this photograph. Despite a penis being a wholly natural and mundane thing, we immediately react adversely to a blunt portrayal such as Pfeiffer's offering.