As winner of 2013's Turner Prize, it was only a matter of time before I visited Laure Prouvost's work at the Contemporary Art Society, EC1. Although the gallery is not showing the winning video installation, 'Wantee', what viewers can discover is 'Monolog', a nine-minute video giving an insight into the artist and, as the press release for the exhibition states, her attempt to deconstruct the figure, the identity of the artist.

The video aspect of the exhibition, 'Monolog', is a warm, witty yet very human entry. Using what seems to be a personal handheld camera, which uses the art of aural impact, perhaps above the visual. Her words in the video, "you'll have to imagine my face", questioning the idea of authorship. With the camera focused on the artist's torso as opposed to involving her face, we are able to relate to her without the video becoming hugely personal. Eventually when we do see a full human figure, it is that of a stranger, purely anonymous and representing something of an idealised youth culture. This is clearly something that Prouvost does not strive for, instead she wants to capture her humility and her normal side, in order to convey her message as clearly and neutrally as possible. The 'behaviour of a supposedly captive audience', as the press release states, is another idea that is disputed. 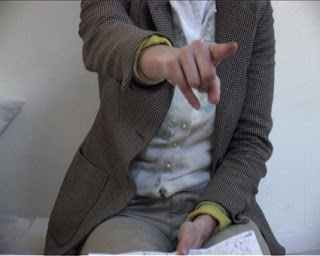 A passive audience participation is vital in 'Monolog', as Prouvost invites her viewers to have a cigarette, to speak over her film, while interrupting the running of the film with candid snapshots such as answering the door and a dog's bark distracting her. This further pushes her idea of authorship, as we aspects of her life and style that are somewhat intimate, in a very casual, day-to-day sense, suggesting that art can reach out and be owned by us all.

Disorder is a big theme in the video, as the editing is far from smooth, and as aforementioned the casual structure and construction of the piece is comforting and allows the viewer to feel immersed in Prouvost's experience. The artist uses this theme to show disorder within order and vice versa. She alarms her audience by using something we all know yet don't wish to be reminded of: getting gradually older before we 'slowly disappear'. This is where Prouvost extends her ideas on identity - and lack thereof - from herself to the viewer by addressing the audience directly, yet still without showing her face. Communicating her voice and gestures with the audience combined with random clips, such as food and holiday snapshots, gives a personal touch to the video, which ensures that she produces a comprehensible, enchanting work of art.