As a small gallery in South London, Bearspace Gallery, SE8, houses several exhibitions a year, boosting small artists with big ideas. In accordance with this, their latest exhibition does not stray from the ongoing ethos of the gallery. The press release for 'Refresh' is intriguing, and allows visitors to consider themes of what they may see before they set foot inside the exhibition space. It presents questions of uncertainty to the viewer, such as enticing us by depicting Suzanne Moxhay's photographic subject matter as "distopian futures (or pasts?)". With the lack of the word 'futuristic', photography of the future appears to be something of a wild paradox, so this encouraged me to view her work specifically.

Alas it seems natural to start my review of 'Refresh' with the work of Suzanne Moxhay, who is one of several artists exhibiting as part of the show. The artist uses an assemblage of photography and newspaper archives layered over glass for a distinctive, crisp touch. Her most visually alarming piece being currently displayed is 'Rains Mine', an 'archival digital print' that resonates highly with the First and Second World War. This is where the speculation and discussion begins over whether Moxhay is working around a distopian future or past, as naturally such scenes are somewhat familiar to us as a modern viewer. The greyscale of the print is presented in a way that is not antique, but instead suggests a terrifying, impending fear. The physical size of the canvas allows the encompassing of the eye and, to some extent, the body. Moxhay works towards pieces that are undoubtedly beautiful, but which include a dark twist that will send viewers seeking more than aesthetics. 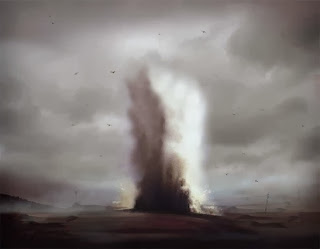 'Rains Mine' by Suzanne Moxhay.
Image courtesy of www.bearspace.co.uk

The next artist to tackle our world's "psychogeography" is Geoff Diego Litherland, who has a fine selection of pieces being displayed in the collection. Divulging his specialist interest in science fiction and abstraction, the former which is somewhat beyond me, we are treated with several of his pieces which can feel slightly overwhelming . One of such pieces, 'Maps - Drifting Away In Every Direction' is a fascinating work, and personally I feel epitomises the term "psychogeography". Having spent some part of his own life living across the world, there is a feeling that the artist expresses something of an ambiguous, perhaps lost identity. Litherland seeks to "question our perception of and relationship to nature", and clearly he has issues and ideas about his own surroundings, and how we can embrace and nurture the space around us, in order to find our own personal closure. The chaotic yet clean presentation of 'Maps - Drifting Away In Every Direction' shows us how it becomes almost irrelevant to show attractive maps with a formalist function, when the depths of what direction really means is much more than what can be viewed on paper.

As is common with shows exhibiting a range of artists, some examples of mixed media are included. This is always interesting, in order to access what different artists find most significant about the  brief, and how to convey this. The artist who has utilised this opportunity the most is Cheryl Field, whose sculpture installations, 'Shuttle Typhoon' and 'Shuttle Endeavour', are awarded extra attention for being not only physically dislocated from the wall canvases, but also below eye level. Encapsulated in a glass dome, the brass sculpture of an upward-soaring plane appears to chart progression and a future incoherent with Moxhay's distopian vision. This is also helped by the crisp construction of Field's sculpture. However it is merely the initial impression that resonates clarity and positivity;  although the plane appears fully functional and active, the viewer notices that the glass dome prohibits this, and in fact the plane has no freedom at all. 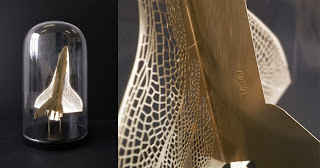 Bearspace seem to have built a tradition of establishing platforms for new and exciting artists, delivering eye-opening and insightful pitches that really unlock your mind to possibilities and perspectives you may not have considered. This is perhaps not the gallery to visit for a brief art trip steered at popular culture, but for those whose interests branch further than art and into the realms of fantasy and, as seen, scientific means, I would certainly recommend you consider Bearspace Gallery.