As the year is drawing to an end, I thought I'd revisit one or two galleries that housed my 'exhibitions of the year' and see what they're showing now. One of my personal favourite exhibitions of 2013 was 198 Contemporary Arts' collaboration with artist Ope Lori to create 'I Want Me Some Brown Sugar'. In addition to the specific exhibition, I find the gallery interesting in itself, as its aim is to support up-and-coming, local artists who present themes based on cultural differences. This is often combined with other prevalent issues to create new artistic ventures. Something I enjoyed about 'I Want Me Some Brown Sugar' was its ability to capture something both personal and political then turn it around, ensuring that it was accessible for a mass audience. 'Rationale To Madness' had much to contend with...

My initial impression of the exhibition was mixed; the promotional image is one that resembles solitude yet something of a proud individuality, which is certainly something the artist, Isha Blake, is trying to establish, not only through her work but within herself on a personal level. However the constant reinforcement of her private life, primarily in relation to her health, can be quite a frustrating aspect. I say this because, especially for women, removing the biographical details from an artist's work has been something that has been struggled with for many years. Of course, she is intentionally incorporating her experiences into the exhibition, in fact it is based chiefly and visually around her, but it begins to feel a little overwhelming. Perhaps this is because mental health is still such a taboo subject, but the inundating evidence will certainly earn different reactions. (Apologies for the rant, but the social portrayal of mental illness is something close to my heart, so I feel the need to raise some questions about how it should be delivered to the viewer)

So onto the content of the exhibition. The photographs, which Blake specialises in as an artist, showcase the artist as the central figure of 'Rationale To Madness'. They are effective in presenting the various problematic dimensions of having an illness such as Borderline Personality Disorder with the artist's use of several techniques. Some are contrived, studio-style shots, which still convey thoughts of solitude and isolation due to the use of a plain white background, showcasing her unique style, which seems to represent much more than fashion. Another method of presenting her themes and ideas, which really are organic and deeply rooted, is her photograph and diary entry. Although, as prior mentioned, the exhibition is based around herself and her own experiences of mental distress, the addition of the diary entry makes her plight more accessible to the viewer, showing the struggle to integrate into society and be part of the non-existent 'normality'. 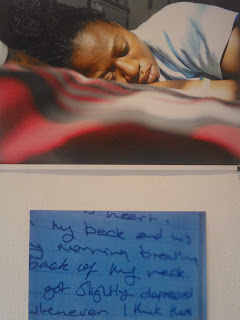 In the exhibition's press release, Blake states that her ambition is to help fellow sufferers of BPD and similar disorders to "find themselves by reflecting on their own journey", and this is clear from the curatorial decisions and context of the exhibition. In her bold steps towards achieving this, the artist utilises several mediums, including installation, which I will now address.

The installation within 'Rationale To Madness' is a real interactive delve into the inner complications not only of mental health, but also the process of coming of age. As the two often crossover, it is a pleasant addition that Blake has included a number of wooden dolls, inscribed with phrases such as "why can't I find where I fit in?" The dolls could be seen to represent a childhood lost in the midst of mental illness, much like the diary entries of the other half of the exhibition. The physical difficulties the viewer experiences in moving around the installation signifies how mental illnesses are viewed by society, as without the 'proof', so to speak, like other disabilities, even family members can struggle to come to terms with and aid the situation. 'Rationale To Madness' is definitely worth a visit if you are looking to explore a more alternative stance on art. Using the perspective of a young woman with a history of mental health in the process of recovery, as opposed to looking retrospectively, is both enlightening and intriguing.