Beware of the marketing for Nicholas Smith's exhibition at Photofusion Gallery, SW9, as it is easy to fall under the impression that a collection of classical marble sculpture is being exhibited at the Brixton gallery. However, Smith is in fact a video artist, with an interesting take on perspective. Taking the banal and the casual, not too unlike Susan Andrews' photography at Hoxton Hall, the artist aims for a form of invisibility as he witnesses the everyday around us.

Embracing 'designated areas of cultural display', the artist's collection at Photofusion shows places of personal interest in his artwork. Some shots are more insightful and, frankly, interesting than others, and showcase different urban ideas. 'Modern Rhythms' highlights the sensory value of the mundane, in this case, building work. The repetitive sound is frustrating to listen to, especially as the footage is on loop. However Smith wants to draw our attention to the small, intricate details of life, that have hidden beauty and meaning. With a wholly unglorified subject matter, a builder, we find that the joy of the senses can derive from many sources, often without intention.

Perhaps the most aesthetically pleasing video installation in 'Reflections on Authority' is 'Ancient Rhythms', which evidently bears a resemblance to 'Modern Rhythms' with its title, but instead of focusing on aural effect, we are presented with the beauty of white marble sculpture. In a clearly modern, sterile setting, the video highlights a binary connection between the classical epoch of sculpture, with its clear lack of contemporary themes, and the physical setting. The colour of the presented room appears to me very significant, as it seems to be showing a blanket of art; in fact, it seems that the subject matter is not the sculpture, which is perhaps Smith mocking the status of high art. 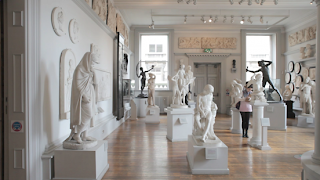 
The title of Photofusion's latest exhibition is thought provoking, as it supports my idea further that Nicholas Smith is mocking the status of high art, as the lack of human visitors of the exhibition to which we act as the voyeur is evident in 'Ancient Rhythms'. Despite this, it shows the way that, as the viewer of such an exhibition, we sanctify the figure of the artist as opposed to being subjective about the physical sculpture and its real meaning. The silence of the 'Ancient Rhythms' footage adds to this, evoking a holy feel, where the utmost respect must be applied to the figures.

In addition to thoughts on the title, there is also the video installation that is presented in a huge spectrum, in comparison to the other pieces, called 'An Occurence'; in fact it has its own room. The glorification has now moved to the sculpture itself, and it certainly exerts an authority over its surroundings. This particular video acts as something of an antithesis to my idea of Smith's satire, as the human observer who enters the frame is physically dwarfed by the sculpture. Indeed, this final note to the exhibition leaves the viewer in a state of confusion and deep thought, as to the theme of authorship and authority, essentially begging the question: to whom does art belong?