Another entry from the borough of Hackney today - this time I have visited Hoxton Hall, N1, a performing arts venue which is currently showcasing 'Archive Imagined: East End' in its May Scott Gallery, a collection of photography based on Hoxton and its surrounding areas. In association with London Metropolitan University and its archives, the exhibition explores Hackney from different angles and perspectives. Something that is particularly interesting about this collection is the range of artists and contexts to the photographs, ranging from Susan Andrews' candid street shots to Ian Farrant's 'Paralympians' feature.

The collection is displayed in such a way that allows maximum diversity for the viewer. As prior mentioned, we have Susan Andrews' everyday shots of the streets of London. Aptly titled 'Photographs From the Car', Andrews takes a fresh look at the idea of the intimate portrait, as the subject is unaware of the voyeur and is thus ultimately free, as seen below. 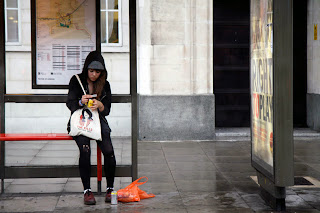 Part of the 'Photographs From The Car' collection by Susan Andrews.
Image courtesy of www.eastendarchive.org

As the curator as well as co-exhibitor, Andrews has ensured a varying degree of artistic ideas within 'Archive Imagined...', with the addition of Mick Williamson, whose three-tiered image conveying shadow movement is one of the most inspiring photographs within the exhibition. Aesthetically, his use of the bold and light tones that form the silhouettes make for a strong picture; the fact that it has been processed in black and white adds further drama and potency to the photograph. Williamson's work adheres beautifully to the theme of the exhibition, showing objects that are relevant on a human level. Although they are more artistically contrived than some of the exhibit's other pieces, they pay particular attention to the minutiae of life, that we often ignore or take for granted.

Another aspect that can be considered in a similar vain is diversity, which in London is something that enhances its flavour, making it the beautiful, rich city that it is. Heather McDonough and Rod Morris have developed the Recognition Photobooth project, a series of photographs that sees volunteer subjects from several boroughs 'pose' (some expressions appear more natural than others) for the artists. Although not strictly unique in terms of concept, McDonough and Morris have established a feel for the project which is inherently 'London', showcasing the constant movement, progression and diversity of the city. They manage this by including the old and young, black and white, male and female, along with cultural highlights such as subjects wearing traditional Nigerian attire and the Sikh turban. I believe that such a series of photographs would make an effective, enticing addition to the London tourism project, as would the entire exhibition.