Anyone travelling through the area of the GX Gallery, SE5, without the intention of visiting any of its current exhibitions, is tantalised by the glorious, glittering display of the dress used in one of Philip Rhys Matthews' photographs. The prominent, regal style of the outfit attracts the eye with its aesthetic value, but is also a trick, which entices us into the unprecedented depth of Rhys Matthews' fashion photography. Something that is particularly refreshing about the photography by the recent London College of Fashion graduate is how the focus of each image ensures that the clothing is but a fragment of the image composition as a whole.

A stunning example of this is 'East and West', a piece that dismantles any preconception of shallow, purely aesthetic work that is concentrated purely on the commission of the designer. Delving into politics via globalisation, the artist adheres to the trend within contemporary art by throwing the issue of the artistic canon into the public realm. Using human models gives the viewer a sense of the reality of Rhys Matthews' point of interest, which is how globalisation has changed the way the world views and uses fashion, in the period 1993-2008. The naked man representing the West, although standing in something of a heroic pose, is attention-worthy due to his nakedness (which will always signify something important in fashion photography). Despite my first impression being that of vulnerability, which is often incomprehensible for a European white male in the art world, I am now drawn to think that the Western male has the capacity to be dominant, powerful and influential, regardless of his attire. This is what is astounding about such a topic with the twist of contemporary art, as we are able to draw multiple, viable conclusions from an image such as this. The clarity of detail and intelligent use of colour in each one of Rhys Matthews' images makes the exhibition a true spectacle. His photographs are almost self-explanatory yet open up an emporium of possibilities. The physical presence of the female outfit of the 'East and West' image only enhances and accelerates the viewer's thinking; the rich tapestry and strong colours show the progression that has been made due largely to globalisation. Something that caught my attention was the colours within the outfit: a rich grey, distancing itself from the feminine archetype, yet with the almost Oriental tradition of the flowers and birds, we can see how the world is accepting the change since the 1990s, yet retaining cultural and individual identity.

The bold, striking colours included in the subject matter of the photography show the vibrancy of the 'East' which is often overlooked in commercial fashion photography, in favour of traditional, recognised designer houses and couture that the public are familiar with. In 'Locomotive', the artist embraces the natural flow and movement of the outfit, showcasing both the decorative and resourceful concepts of the dress. The viewer cannot help but feel that, in terms of publicity, Rhys Matthews would excel in prioritising context and place when producing promotional material. As we can see from this exhibition, he has combined commercial and artistic needs in order to create beautiful artwork.

'Fiscal Cure/Fiscal Cancer' is merely a fraction of what is currently being exhibited at the GX Gallery. The remainder of the gallery houses pieces from artists including Alice Wisden, whose distinctive work draws comparisons to pop art and satire, yet covers sensitive topics such as the war. 'Did Your Daddy Write?' is deeply heartfelt, but Wisden's eerie, comic twist manages to reinforce the ultimate tragedy of the print and its painful context. Her work is distinctive and must be seen, as it conjures up a menagerie of emotions, enhancing the viewer experience. A final note must be made about Massimiliano Cacchiarelli Principi, whose sculpture bears strong resemblance to works seen in great art institutions such as the British Museum. His intricate bronze and gold designs appear timeless and round off the GX Gallery visit, which amounts to a varied and beautiful collection of works. 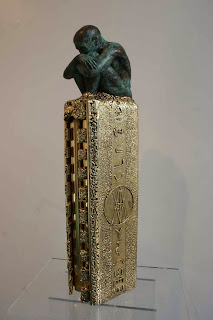