With a huge name such as Damien Hirst exhibiting at this free exhibition, there are already huge expectations, or perhaps 'anticipation' is more apt, for what will be displayed, especially as this is the first collective showcase of Hirst's 'Visual Candy' series. However we must not forget the late minimalist sculptor, Gonzalez-Torres, whose work sadly seems to provide a mere backdrop for Hirst's wall canvases.

Despite the successful contrast between the white gallery walls at Blain Southern, W1, and the collection's bright, busy pieces, the curation of 'Candy' is confusing. Hirst's pieces have been staggered beautifully; there is much debate and controversy around his work as a whole (which consequently makes him a successful contemporary artist) but personally I found depth in his 'Visual Candy' pieces, which I will eventually elaborate on. However although I appreciate that the nature of Gonzalez-Torres' work is not intended to be curated in a traditional manner, it does not seem to adhere to the flow of either the gallery or the exhibition.

So it is the latter artist's work that I shall address first. Upon entering the gallery, the viewer does not notice one piece of work before the other, which is largely due to the consistent bright colours throughout. In fact, as Gonzalez-Torres was a minimalist installation artist and sculptor, whose work was intended to be potent in a way other than visual, this makes the installation more intriguing and requires multiple viewings to try to comprehend it. (Each one of his installations within 'Candy' is named 'Untitled', so please bear with me)

His first installation, pictured below, is a 'heap' of candied sweets, which are replaced at each exhibition. Personally it reminded me of Christmas; but of course, the packaging and bright colours all present the superficiality of the season, a constant facade that we are all too willing to submit to. Feigning happiness is an overriding theme in the exhibition, as will become more apparent in some of Hirst's pieces. The messy heap in which the sweets are presented highlights further the force and ludicrous demands of the West to have all we want, yet what we find instead is an excess, lacking what we really need. 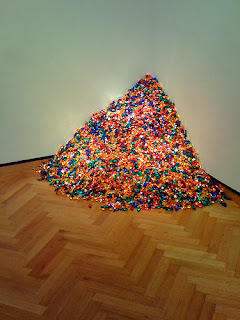 The two other installations from Gonzalez-Torres continue on a largely similar theme. Interestingly the 'works list' of the exhibition details that each of the artist's works contains an 'endless supply' of the coloured candies, parodying our belief that the earth has infinite possibilities.

Now onto Damien Hirst's oil canvases, which lined the walls while Felix Gonzalez-Torres' installations lay in several forms around the gallery, as you can see from the photograph above. Chronologically, the first two pieces are 'Play Away' and 'Happiness', which were both created in 1993/1994, around the same time as the exhibition's installations. This was the time shortly after Hirst's was propelled into being one of the UK's most recognised contemporary artists. With the simple titles, we can see that the ability to produce work with such vitality (which incidentally isn't intended as a paradox to his 'For The Love of God' diamond encrusted skull)  fills the artist with inspiration and freedom.

The titles of Hirst's exhibited pieces appear to fulfil the microcosm of 'Candy' so elegantly that they begin, very quickly, to feel ironic. 'Dippy Dappy Dabby', which is almost onomatopoeic for the detail of the canvas, and 'Smile Smile' come to mind. The latter is a rather enlightened piece, showing a similar image to that of 'Fat Fun' etc., but with his chosen medium of oil paint almost spilling off the frame. The colours are much murkier and less solid than its counterparts, and there is a sensation that the initial excitement, the youthful exuberance, that was once the driving force of the artist's creativity, is realising its dreams, growing up and experiencing the reality of the world.

'Candy' is a brief exhibition, a collaboration that certainly retains the feel of the YBAs. Blain Southern has laid out a display that is a great chance to see some original Hirst pieces, alongside Gonzalez-Torres, the minimalist sculptor; despite the title, the work on show really does complement eachother and is a visual spectacle. 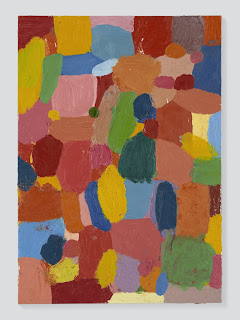