With a title such as 'Home Truths', there is an immediate expectation of depictions of brutal reality in a postmodern world. The current exhibition at The Photographers' Gallery, W1, certainly meets and confronts its expectations - then reminds us that it doesn't care for expectations or customs. The subtitle of the collection is 'Photography, Motherhood and Identity' and what becomes clear is that these artists want to showcase art that destroys the canon, exposing the reality of childbirth and motherhood on the female body; a subject that has been traditionally censored or avoided as taboo.

Of the several artists exhibited, each is poignant, sensitive and alarming in equal measure, which makes for an extremely serious collection. This is a feminocentric collection, which reminds women that there is nothing to hide from after becoming a mother. Candid shots from 'Home Truths' expose the inescapable reality of childbirth, which if we cannot relate to ourselves, we will have witnessed it through our friends, sisters and mothers.

Janine Antoni's photograph 'Inhabit', pictured below, was the first item that drew my attention upon entering the exhibition, as it is a highly representational piece. The artist herself is suspended in mid-air, feet above the ground, being held by several pieces of string. Pulling from all angles, the string shows the forces that help, alter and hinder her experiences of motherhood, and how she feels isolated from those around her. Antoni herself specialises primarily in photography and sculpture, and this is clear from the photograph, as she has ensured that the bright colours of her surroundings overthrow her as the focal point. The muted tones of her flesh and brown hair lay the foundations for her to be almost a part of the furniture, as she is immersed within a doll's house, which of course alludes to Alice In Wonderland. There is also an addition of the spider web between Antoni's legs, (which I must admit I did not notice before reading the exhibition catalogue) signifying the lack of sexual desire since becoming a mother, which is certainly something that is addressed further in the exhibition. 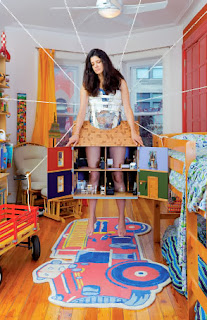 I will also briefly touch upon Leigh Ledare, who has gathered a vast amount of public attention since the opening of his 'Pretend You're Still Alive' collection. His segment of the Home Truths exhibition features photographs of a highly explicit nature - of the artist's mother. It really is something you have to see yourself to believe, if you want to believe it, but the works truly are disturbing. Due largely to Ledare's contribution, the exhibition as a whole has a 16+ age guidance, with children over the age of twelve being permitted if they are accompanied by a 'responsible adult'.

Family relations, of a slightly different nature, are also explored in Elinor Carucci's photographs, documenting her own stages of childbirth and motherhood. One of her first photographs, 'Induced', shows an image that resents that which is usually depicted of childbirth. Carucci appears completely isolated yet overwhelmed, using effective lighting so that she herself is highlighted with bland whites and greys as a background. The artist appears to be having some sort of epiphany, and Carucci wants her audience to have the same realisation of what motherhood really means, and how it has affected her on such a deep level. The same struggle is also highlighted in 'Bath', taken two years after the birth of her twins. The aspect that is particularly engaging in Carucci's work, both at The Photographers' Gallery and in her new monograph, 'Mother', is how she has documented the raw emotion she feels with her children for almost ten years, describing it herself as somewhat 'erotic'.

Ultimately, 'Home Truths' is a stunning collection, with reality and perception accounted for, allowing each viewer to bring their own ideas and experiences to add value to the photography. Additionally, the medium of photography allows the artists to convey momentary glimpses into their world, which in the case of 'Home Truths', happen to be of utmost intimacy.