Amongst the hustle and bustle of King's Cross lies New St Pancras' Church, a nineteenth-century Greek Revival church which houses The Crypt Gallery, NW1. Upon entering the gallery, visitors are forced to think about the significance of space and setting when curating a project. The cold, bare structure of The Crypt completely alters the air of the exhibition, and that is something an artist would have to consider carefully before choosing this location as the hub of their exhibit. Personally I believe that the type of exhibition that would benefit most from such a dominating surrounding would be something dark and stirring; the first thing that crops up in my mind is the Tate Modern's 'Art under Attack: Histories of British Iconoclasm'.

However I digress; the exhibition's sub-title, 'an art practice as a way of looking' adds much to Cave's collection, as there does not appear to be much consistency between pieces, but employing special techniques of 'looking' allows further understanding and enjoyment of the artist's work.

As the artist has herself defined, the collection's aim is 'celebrating beauty and its many juxtapositions', which certainly illuminates some of Cave's work, and one which struck me as one of the more significant pieces is 'A Young Man's Fancy', an acrylic painting which is centred around a shape which is unavoidably reminiscent of a vulva. Collaborating with the title, what is most amusing and truthful about this piece is its washed out, flustered background, which appears to be visually fast-paced. It seems to be a blurred array of colour in the formation of a day-to-day scene, showing how the lust of this 'Young Man's Fancy' has slewed his senses. I also interpreted the vulva at the middle of the image as representing how desire, in one form or another, is the driving force of existence, whether it be sexual desire, ambition or determination to better oneself.

Another piece within 'Curiosity' which demands the nature of the title in order to be appreciated fully is a collection of paintings within an inner cove, which have been given the collective title of 'A is for Obsession'. The artist shows us with this 'curiosity' that is necessary throughout the display, which when we open it inside our minds, we are able to see a world of perspectives. It could be suggested that is why Caves has used the basic object of an apple, in various different positions, angles and sizes, so that the viewer is forced to think beyond the subjectivity, and use more than their periphery. 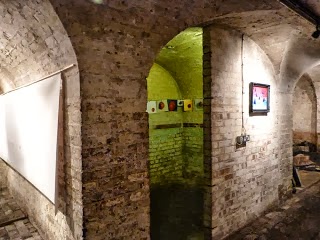 
Although all exhibitions aim to make their viewer think deeply about the subject area, or the theme of the collection, with 'Curiosity', looking further and in more depth is the theme, so one is aware that upon looking at a work of art, what is presented visually on the paper is only a fraction of what the artist would like to convey. Cave's guest artist on the exhibit, H Locke, conducts this nicely. Locke's pieces fit in perfectly to the maze-like structure of The Crypt, as two long pieces of white paper with sketches of various types of homes. All the homes, though clearly differentiated, from large and elaborate to small and shack-like, are linear, showing how we are all living on the same terrain; material differences are trivial against what we all have in common.

'Curiosity' at The Crypt Gallery is a bafflingly enchanting collection, owing in no small part to its surroundings and Cave's use of bright colours that certainly add life to the pieces. Running only briefly until 20th October, (but also part of the upcoming Bloomsbury Festival) I would recommend the exhibition also to those who appreciate architecture, as New St Pancras' Church is, of course, a work of art in itself.