The Jerwood Drawing Prize is one of the longest running open art competitions in the UK, and with over three thousand entries this year, the judges (who included Charlotte Mullins, editor of Art Quarterly) had many worthy contenders to sift through before deciding on a winner. Jerwood Space, SE1, is where the shortlisted works are currently being displayed, having toured the UK.

The winner of the prize this year is Svetlana Fialova, an artist who lives and works in London but is studying for a PhD at the Academy of Fine Arts and Design in Bratislava. (I mention the winner first as the curatorial decision has been made to put her at the start of the collection) Her winning piece, 'Apocalypse [My Boyfriend Doesn't Care]' uses its amusing title to highlight the fractured structure of human nature and its relationships. As both a parody and explanation of psychological, mental and emotional differences between men and women, Fialova has used ink in a very sketchy way; to the viewer it isn't unlike looking at doodles in a notebook. Despite the static sketches, she has employed the generalised blues and pinks for gender differentiation. As a whole, the canvas is troubling to the viewer with its busyness, as it reflects the ideas and thoughts that run through the mind on a daily basis. Fialova's content is neither calm nor easy on the eye or mind, other than that of the protagonist 'boyfriend'.

Scott Robertson's 'Chin Up' is a masterclass in simplicity, but personally I couldn't shake the comparisons with the 'Keep Calm and Carry On' tagline, which seems to be something of a kitsch epidemic at the moment. A blunt stab at funding cuts within the arts, Robertson's piece does show that art is worth more than its materials. His piece is of a creased piece of paper with the words 'Chin Up' in a recognisable print. In well-executed exhibitions such as the Jerwood Drawing Prize, it is easy to forget that due to funding being withdrawn from many arts institutions, charities and enterprises, the next generation of artists will find fewer options available to them.

An interesting recurring idea within the exhibition, which I must say I do not see much of, is alternate forms of art, as seen with Aideen Cusack Leggett's 'Dance Wallpaper' and Sally Webber's 'Fantasia'. The latter presents a visual on how music can affect a person and alter their emotions. Webber's piece consists of a musical score of Bach's 'Fantasia in C Minor', with additional notes physically flying above and beyond the stave. Her choice of this particular piece reveals her intention, as it is fast-paced, choppy and climactic. Leggett's 'Dance Wallpaper' shows something quite different. The timid, faint pencil sketches represent different sensations that music, and dance, can evoke. Upon closer inspection (which you must do; the canvas could be mistaken for being blank from further away) the piece includes a break-dancer and a passionate pair dancing the tango, to name but two. The many other examples included within the work generally show how music and dance is an integral part of the fabric of society, and many cultures throughout the world.

Of course, the Jerwood Drawing Prize would not be a genuine reflection of contemporary art without some abstraction. There were some examples of this, but one of the most note-worthy, in my opinion, is by Georgia Mota, called 'City as an Organism'. Upon further research I discovered that she is a current Fine Art student at Central St Martins, and exhibiting at Jerwood Space at nineteen years old is a huge achievement. Her chalk and charcoal creation feels like a postmodernist take on op-art, and the intricate layers and sketches make her work both memorable and challenging.

There are many 'drawings' (in accordance with the title of the prize) that deserve mention and recognition, but to avoid my blog becoming a hefty essay, the last image I will refer to is Jeanette Barnes' 'The Orbit - Olympic Tower Near Completion'. For someone like me, who was totally indifferent to the Olympic Games being hosted in their home city, before being blown away beyond comprehension, this is certainly a symbolic drawing.The tower itself, shown below, looks overwhelmed by its surroundings.  Barnes' use of charcoal also brings a sinister, cynical tone to the image, far away from the grandeur and glamour of the opening, closing and medal ceremonies. The artist has managed to capture the bewilderment of the people. Viewing the Olympic Tower first hand, it does bare a resemblance to a theme park ride, but what I see is Barnes expanding on this in her drawing. What is a rollercoaster ride? A momentary, dizzy fraction of your life where your cares have gone, reality is marred and there are (physical) highs and lows. Maybe the structure design was no coincidence... 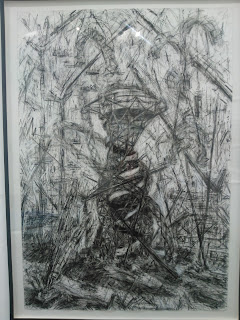