Yesterday I visited a very different exhibition, this time at the Barbican Centre's 'The Curve' gallery, EC2, where Turkish artist Ayse Erkmen is abandoning her sculptural specialty in order to curate a collection of backdrops. Erkmen ensures the viewer contemplates and pays due attention to details and links from each background with the slow vertical movement of each piece, which 'unlocks' the next, stunting the viewer's natural flow.

Finding myself almost trapped by the various backdrops, the artist uses this time to ensure that individual and due attention is paid to each scenario. The citations of the collection are presented at the front of The Curve, before you have even seen the first slide, and even these do not explain the artist's motives for using each one. This sharpens the attention span of the viewer even further, as Erkmen presents the pieces she has chosen and opens the floor to personal and logical interpretation.

Consequently, I believe the exhibition will be received very differently depending on the individual. Knowing a little about the artist in advance allows an educated process of filling in some of the gaps. Needless to say, some are more self-evident than others; James Rowse's map of Turkey and the Mediterranean gives the display an immediate, widespread feeling of one's own culture and heritage. Being aware of Edward Said's works on 'Orientalism', personally I feel that 'Intervals' is Erkmen's way of exploring the depiction of the Middle East, and similar/surrounding areas, and how that is able to influence the views and ideas of the public.

The artist's inclusion of backdrops from operas, The Mikado and Lucia di Lammermoor, presents an idealised view of the exotic, the foreign; one that ethnic majorities generally like to believe and feel involved with, despite the colonisation and domination of many of them. There is a similar theme in another screen within 'Intervals', a still from the longest surviving animated feature film, The Adventures of Prince Achmed, from 1926. Here we are treated to an 'Arabican nights' shot, which again illuminates the use of the stereotype with the unknown.

It is around the half-way point that the stunted progression of the viewer due to the slow movement of the screens becomes rather tedious and you are left wondering whether it is something of a gimmick. However, as I have said, the delay does give you time to analyse and piece together the clues within the collection; not to come to some elaborate conclusion, but in order to work out what the artist is trying to convey. The final backdrop being from the Musée d'Orsay of Paris shows an almost conclusive element, in that the project has wound up being relevant for today's modern audience, and does not just abuse the somewhat interactive element as kitsch.

I feel that the exhibition is not helped by the fact that such little information is offered to its visitors. It seems a shame that as an artist, Erkmen has chosen to not exhibit her own work, but take a variety of works that have inspired her, ranging from a National Theatre backdrop based on a seventeenth-century set design to a black and white printed map of Turkey and the Mediterranean. As a collection, there isn't an awful lot to be astounded at; the fact that none of the work is Erkmen's own is a huge disappointment. I believe that the addition of sculpture by Erkmen would have been a personalised touch on a theme which is clearly significant to the artist on a personal level. 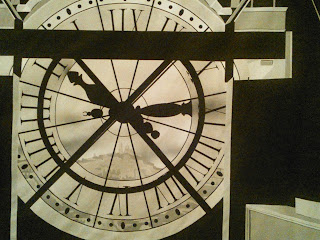 (Backdrop based on a clock face at the Musée d'Orsay, Paris, designed and painted by Nancy Nicholson) 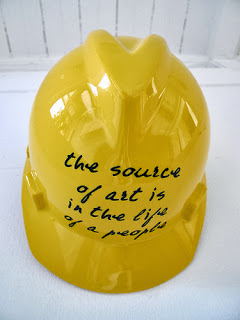 This is a work of Ayse Erkmen's called 'Construction'. Not included in the exhibit, but I thought I would add this to show that her sculptural work would certainly not have been out of place in 'Intervals'.