Japanese retrospect seems to be popular in the art world at the moment, what with the British Museum's Shunga exhibition gaining popularity and rave reviews. Annely Juda Fine Art, W1, does not shy away from this with its current exhibition from the Japanese visionary artist, Katsuhiro Yamaguchi, whose career impressively spans from the 1950s, where he was one of the founding members of the Japanese avant garde movement.

In the sterile yet versatile location of the Annely Juda studio, Yamaguchi borrows ideas from what a modern audience would recognise as both minimalism and constructivism. Something the viewer can certainly ascertain from the artist's work is that his pieces are undoubtedly modern and are also universally somehow recognisable. For instance, Yamaguchi's 1961 mesh sculpture is on display, and to some it could appear to take the form of a megaphone, telling the world that there is more to Japan, its people and its artists than the romanticised stereotypes the West holds.

As a gallery space, Annely Juda Fine Art specialises in Russian Constructivism, according to its press. That somewhat explains why there is sense in in exhibiting Yamaguchi. It is interesting to address the inevitable concept of not only the viewer-artwork relationship, thanks to the curator's use of space, but the utilitarian aspect of some of the artist's works. Although superbly lit, the gallery allows sculptures, such as the mesh variety prior mentioned, to produce a shadow that finds itself an integral part of the showcase. Knowing that perception varies from viewer to viewer, light has been used as another medium, showing a dimension of the mesh that is not initially acknowledged, as pictured below.

If Yamaguchi's influences were not clear enough already, his written piece 'From Observation to Media Literacy' is displayed, citing Constructivist pioneer, Vladimir Tatlin, and philosopher, Marshall McLuhan. One of McLuhan's core ideas is stressing the importance of medium in order to convey the message of the artist in the most effective way. The artist behind 'Imaginarium' has utilised McLuhan's ideas alongside his own philosophy as part of Tokyo's Experimental Workshop movement, which is emphasised in his 'Flash' light sculpture. This particular piece uses, of course, flashing lights that could be interpreted to represent life's constant movement and progression, which translates into art. The sculpture is further illuminated by his use of yellow acrylic. Artwork in Japan in the 1950s/60s was both diverse and exciting, and this is certainly portrayed at the Annely Juda's current show. 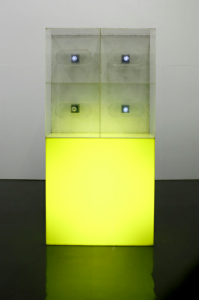