Having already toured the Getty Images Gallery, Hoxton Arches and The Gallery In Cork Street, State of the Art Cinema finally landed in the Brick Lane Gallery, E1, earlier this month for a limited run. An absolute treat for film lovers, the exhibit showcases marketing from the past year of global cinema. Although the vast majority of the promotional material will look familiar, it is interesting to pay attention to the methods used to exert life and interest into the films.

State of the Art Cinema ensures that it caters for a diverse range of film fans with the six categories: Britain on Screen (such as Alan Partridge: Alpha Papa and One Direction: This Is Us), Suspense (including The Last Exorcism Part II and Jurassic Park 3D re-release), Dramatic Twists and Turns (featuring among others The Great Gatsby and Renoir), Comedy (including The Hangover Part III and Grown Ups 2) and Family (such as Monsters University and Despicable Me 2). As you can probably tell, the posters are very much mainstream-centric, however additions such as the re-release of the 1953 classic, Roman Holiday, and new Bollywood comedy, Besharam, give viewers a taste of films they may not have already explored.

There is a downfall in this exhibition in that the films displayed are very recent. The majority are still in the box office or will be released in the near future. Personally I believe visitors of the exhibition would have had the opportunity to be educated and enriched further with the inclusion of some older, classics films. Charting the progression of the graphic design techniques used in the film industry would have made for even more of an engaging exhibit, showing how the 'want-to-see factor' has changed.

This exhibition is certainly appropriate for the whole family, as each member will be informed and educated on new cinema releases. A simple outlook on what summer 2013 has to offer in Hollywood and the like, you may be inspired for your next trip to the cinema.

(Courtesy of cinema-way.com, here's Hugh Jackman as Wolverine - ladies, if that doesn't encourage you to get down to the Brick Lane Gallery before the exhibition finishes, nothing will!) 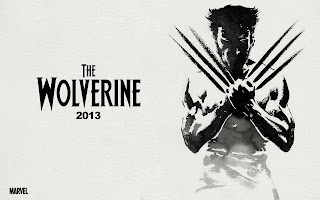