Last night, Let's Make Lots of Monet had the pleasure of attending a private viewing of the National Portrait Gallery's BP Portrait Award 2013, where some of the world's latest portraits are presented, with an array of subject matters.

As part of the event, artist and winner of the BP Travel Award 2012, Carl Randall, spoke to guests about his work, where he was commissioned to travel around Japan for a year and create pieces that spoke of this journey. When questions were opened to the floor, he was asked what made him decide whether a piece would be in black and white or colour. He made an interesting point about whether or not colour is a focal point of the subject. For instance his painting, Onsen, pictured below, would clearly not maintain the same level of beauty had he not included the rich blue of the water. 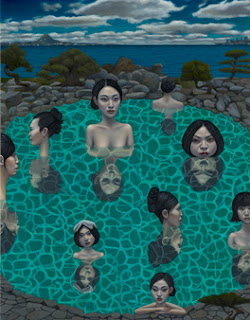 A portrait that certainly ignited discussion and attention was Geert Schless' Kristy, an image of the artist's wife. The citation informs us that the woman was recognisable despite a large bag being placed over her head. However for me this opened up ideas about protection and identity. Traditionally and romantically, artists have drawn portraits of their wives in an approach that is largely flattering, accentuating beauty. But here we have Schless who has not decided to reveal what his wife looks like, so I must disagree with the citation claiming she is still recognisable. Kristy is, without doubt, an amusing piece, which provokes deep thought and debate.

I thoroughly recommend this exhibition, as the diversity is truly outstanding and contributes to its value. It is a worthwhile visit for those with the desire to explore new pieces from a wide range of artists. Any accompanying children will be pleased with the National Portrait Gallery's ongoing Next Generation project, as it adds small children-friendly citations, including 'Did You Know...?' phrases, sure to prompt family artistic discussion. In addition to this, young people can find that the project also commissions several events tailed for them, including portraiture lessons.

After-thought: See if the citation of Laura Robertson's portrait, Laura in January, doesn't make you chuckle.