Horniman Museum: Rainforest of the Sea (until 15th September 2013)

I promise that it's a pure coincidence that my first two posts are on a photographic exhibit, but today I visited the Horniman Museum, SE23, where they currently have an astonishing exhibition on the photography of the plight of the coral and its inhabitants. With the museum's already impressive array of similar fish in its own aquarium, it seems fitting to have such a display.

This topic of photography, I must admit, does not usually interest me, but it's difficult not to be taken aback by the beauty of the exquisitely detailed photographs of the deep ocean. Not only is the viewer able to see the beauty that is almost alien to a city girl like myself, but its curator, Jamie Craggs, clearly has a message to convey.

With help from marine charities such as Project Seahorse and the SECORE Foundation, the exhibition hopes to show visitors the beauty of the ocean, while highlighting the very real peril of the sea creatures. Perhaps the most alarming photograph is one of a pregnant male seahorse, the colours just as clear and beautiful as the others. The seahorse in the centre of the photograph had been killed for medicinal purposes. In a world of marine fascination, it is an inspiring thing for a curator to add a sense of reality, a sense of moral responsibility to the exhibit, and I believe that this has been done in a way that is almost chronological; from the way I gravitated (clockwise), among the first photographs was the turtle swimming through the ocean, which almost transported the viewer to a place where they truly believed they were watching it first hand. The gradual realisation that the subject matter are in danger of extinction is what makes this such a powerful exhibition.

As the Horniman Museum is recognised for its family-orientated content, it should not come as a surprise that I recommend this exhibition for families with children of all ages. Young children will appreciate the intense colours while slightly older children can be educated about not only different species that they may not have encountered before, but also the importance of a sustainable lifestyle for the next generation. 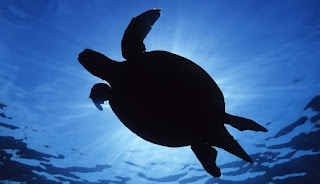